Just over 95 years ago [March 23, 1920] Kingsford-Smith, later to become Sir Charles Kingsford-Smith landed his Vickers Vimy (a World War 1 bomber bi-plane) at the culmination of the first plane flight from England to Australia at the Northfield aerodrome on the outskirts of Adelaide.  It is now an inner suburb.

As a young boy, during our car trips through this area, my father would often tell, and retell, the story of his moment of being part of this historic event. Now lost over time, there had been a photograph of my father as an eighteen-year old taken on that March day in 1920. 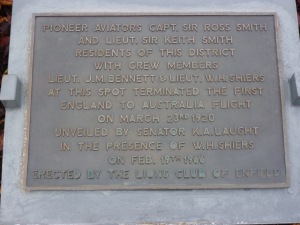 My father [eighteen at the time] had walked and hitched rides from his mother’s home at Parkside to watch the Vickers Vimy land at Northfield.

The press of the crowd, reported to be in the thousands, was too great for him to catch any more than a glimpse of the Australian heroes, but he was there.  He saw the plane and his stories made that historic moment mine as well.  Dad had a photograph of his moment, amongst the crowd, at the landing.

From the old photograph that was buried in the bottom drawer of the sideboard in our dining room at home, I can remember my father in his suit and tie, white shirt, and bowler hat, jauntily smiling at the camera. Why is this important to me, and today? 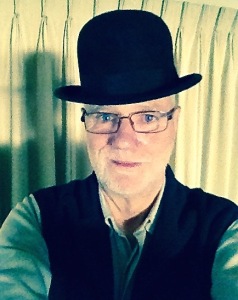 The old, black, bowler hat had been one of the heirlooms that somehow has been in my possession for thirty or more years.  Over time it had been severely damaged and I had often contemplated tossing it out.  However, I kept it.  Today I collected this special piece of history from ‘Adelaide Hatters’ in the Adelaide Arcade, where it had been beautifully restored.

I have my father’s bowler hat, but I wish I still had the photograph.