While I am not a big one on street markets, they can be interesting. My experiences have been that they start early to catch the breakfast crowd and wrap up mid afternoon. Here they were setting up around 11.30am and not trading until around lunchtime. 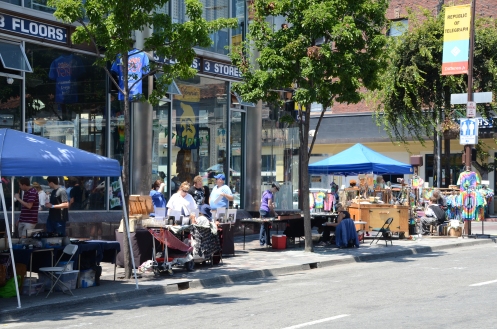 Both sides of the avenue had tables set up; mainly selling jewelry, pipes, mystical charms and other dust collectors.

Bert was an interesting character. I’ll call him Bert as he was somewhat secretive about his details, but I still managed to glean a modicum of his story. He sells marijuana–well he makes the pipes to smoke the weed, but he has been a partaker of the product for some time. There were a couple of street stands where homemade pipes were being sold. Smoking of marijuana in California is legal, if done for recreational purposes, at home. Although by the aroma that rule didn’t seem to bother Bert all that much.

This bushy bearded character is of indeterminable age. However, after seeing my Nikon camera Bert stated: ‘I had one of the early F 1 models, got it when I was in my 20s, brand new it was. Wish I still had it, but can’t get film now-a-days.’ Given the F1s came out in the late 50s or early 60s that would make Bert somewhere north of 70. 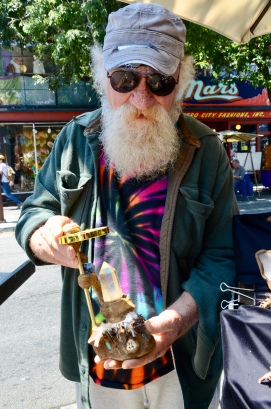 The ‘solar’ lighter and pipe 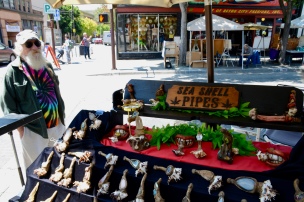 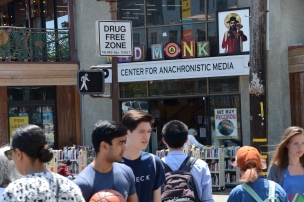 He has been a street vendor for 47 years and came to San Francisco in ’74. ‘I was down south of here before then.’ He claimed he ‘got out’ before drifting to California. He didn’t elaborate on that, so whether he had military service, wanted to escape his past, or was serving time, is pure speculation.

Like many in the art of street selling, Bert loved to chat and went to great pains to tell me about his knowledge of Australia and New Zealand. He claimed to get the Paua seashells sent to him from a contact in Auckland and he makes the bowl of the ‘pipe’ by setting the Paua shell in a wooden stem. One special creation was a contraption with a brass framed magnifying glass built-in to it and using the sun Bert lit up a: ‘bit of special baccy just to demonstrate that it works,’ said with a wry smile as he sniffed the offending smoke. 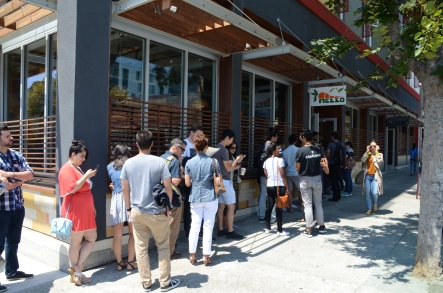 Line for popular restaurants is common

Being in walking distance from the university campus there is a profusion of eating places.  I’ll be wandering out shortly (again) to try a different cuisine tonight–possibly Korean.  Some of the eateries are so popular that people, (mainly students) queue for ages.  The staff hand out menus to those inline so that their selections are made by the time they hit the counter.