The three-dozen or so passengers who boarded in Winnipeg eventually settled in around 0630 Friday morning. Thankfully I got on board before it rained, as the platform is in the open and not sealed. The staff on-board are friendly and guided me through the various aspects of the sleeping quarters. Quite compact cabins and certainly no room for other than carry-on luggage. I climbed into bed expecting to be comatosed by the clackety clack of the train over the rails. However, the train moved no more than two Km and stopped on a bridge spanning the Red River. We sat for at least another hour and I dozed. 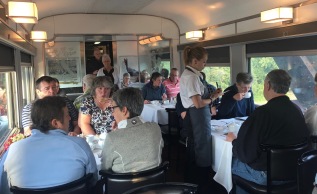 The meals were first class

A big breakfast was offered…mine consisted of a coffee and toast. As I returned to my ‘cell’ the train started to move and I was quickly lulled to sleep. Freight trains have the priority on the rails here. I have been surprised by the amount of freight movement by rail with the consists long (160-200 flats) and often the containers are stacked double. The passenger trains are regularly shunted off to sidings or stopped to allow freight to pass uninterrupted. So schedules for passenger services across Canada are flexible. For sure, the east-west trains do not run early.

Unlike travel by plane, people on trains move around, sit together for meals, or to have a coffee and talk. The majority seem to be retired, but there are younger travellers as well. Apparently there are some other Aussies on-board, but I haven’t caught up with them as yet. People are friendly, chat and are inquisitive about Australia. Talking to an almost captured audience, they are interested in my research and oral history in general. The idea of linking their narrative to their collection of family photographs is appealing and not something that had been considered previously by any with whom I have spoken. Maybe I’m having a little influence.

The early part of this journey is over open prairie, crops, hay waiting to be bailed and small herds of cattle. The countryside is very flat and so green for the middle of summer. After some further stops to let freight through we slowly moved in to forests. Young pines, birch, cedars, maples and elms pack each side of the tracks. There are patches where a fire had swept through and the pines were dead. However, new trees are starting to reclaim their rights again. Then there are lakes–dozens of them. Small communities, holidaymakers, canoeing and fishing are common to see. However, most of the lakes are pristine with no one disturbing the tranquillity. Apparently Ontario, where we are as I type this up, has tens of thousands of lakes in its Province. I’m sitting in the upper-deck viewing lounge and the vistas are special. Green and blue, trees and water. I estimate that we are travelling at around 60 km per hour so it is a comfortable speed to take in the scenery. As I typed this we slowed to a jogging pace again–no we have stopped.

By mid afternoon the fuel tanks had to be topped up at a small hamlet, interestingly called Sioux Lookout. At a guess there would only be a few hundred people living here, including a First Nation community. While we could hop off and stretch our legs there was no time to leave the siding/station. 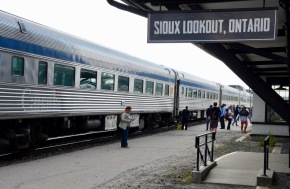 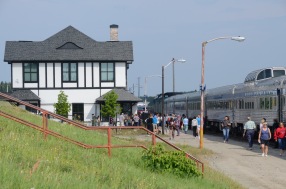 The journey has been in sun since about 10 am and I am still mesmerised by the number of lakes. It seems that every half a kilometre there is a new body of water, another wide creek or a swampy marsh. The service from the dining car is outstanding and the food in preparation, presentation and taste is excellent. I contemplated buying a book to read on the trip, but I am glad I didn’t. There has been much to do. Okay, some Blogging, but meeting others, mainly Americans and Canadians, some from China and India and the other elusive Australians.

After the re-fuelling I sat in the lounge car where two musicians were entertaining anyone who stopped to listen. Apparently Canada Rail provides complementary travel for entertainers between Vancouver and Toronto, if they entertain the paying customers during the journey. I spent forty minutes listening to them sing whilst playing the banjo and ukulele. It is a small, small world. We spoke between renditions of Beatles music, Gordon Lightfoot and others, plus some local folk songs as well. Perri is a classical pianist and is based with an opera company in Toronto. Phil is a sound technician and works in the Centre for Oral History and Digital Story Telling, at Concordia University, were I am heading next. 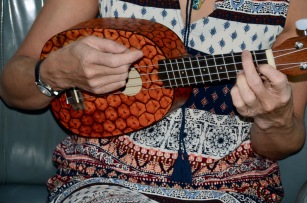 Dinner is over; I was in the first sitting. It is dark outside, the clocks have been wound forward as we travel further east and the speed of the train has picked up considerably. There must be a clear line and no slow moving freight trains. Time to pull down the bed and catch up on some sleep.

This Blog was written on Friday August 18, but there is no Internet access in the middle of Ontario. It may be a day or so before this gets out to the world.