My blogging is not in strict chronological order however, I will return to the past couple of days shortly.  Tonight (Sunday) is my final night in Vienna for this trip.  I could easily return here again.  I’d even suffer the cold to see it in winter.  Tonight I left the hotel about 7pm and walked towards the grand Parliament building (apparently it has 17km of passageways) and the shopping malls – although the shops are not open on Sundays.  It was still over 40C and people were strolling along the avenues, the parks and through the grounds of beautiful and historic buildings.

There was music.  At first I thought that there was a street sound system through which it was being piped, but it turned out to be live performances.  I listened to a Strauss Waltz played on guitars in a beautiful park for about 20 minutes.  Becoming hungry, I wandered in the direction of the city centre and listened to a woman singing opera.

I have no idea which opera it was, but her voice was pitch perfect.  Then as I was having my dinner in the mall, an older gentleman set up his squeeze-box and he belted out more waltzes and the odd polka as well. 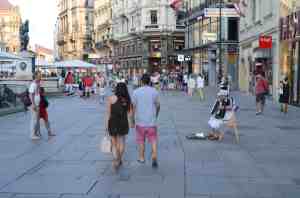 My dinner was filling, good ‘sausages’ and a cold, cold beer.  Then I treated myself to a gelato (three flavours) ice-cream.  Walking back past the Sisi museum I sat a listened to one of Beethoven’s compositions being played followed by a piece composed by Mozart.

The string music was delightful.  It was dusk as I strolled back through the Volks-garten with the faint sounds of the two guitars still playing.  A beautiful evening and wonderful memories of Vienna. 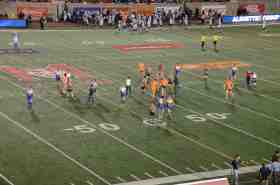 I went to a Canadian football match and watched an AFL game.  Well it was at half-time, a demo match and rather low skills, but the locals got the idea and were appreciative.  The people around me were somewhat surprised that none of the players wore any padding, helmets, or other protective gear.  However, it was fun to watch.

The main match, the Canadian game, was between Montréal and Winnipeg.  The two cities in Canada where I have spent most of my time.  Winnipeg is the stronger team. Montréal has only won four of nine matches this season and only at home.  Apart from the game, which I must admit, I struggled to follow at times–it was nonstop noise, advertising, commercial breaks for Tv and ‘cheer-girls’.  I’d argue that the girls worked harder than most of the players.

The girls workd harder than some of the players

Key Players were introduced before the start of the game

Advertising, did I mention advertising?  It is a stop-start game, not at all free-flowing and depending on the state of the game, the complete team changes.  Interesting the loudest noise was made when the opposing team has the ball down and about to make a play.  The idea is that if it is noisy enough they cannot hear the play being called.

Montréal trailed 10-0 for most of the first half, but it was even at half-time.

I’m not going to try to explain its rules and strategies here, it is beyond my comprehension.  The game is played in four, fifteen-minute quarters, but with stoppages, changing teams, and all the other activities it lasted almost three hours.  Montréal trailed most of the match and with about four minutes left it was down by seven points.  The exodus was like a Port Power game at Adelaide Oval when it is being thrashed in the final quarter.  Yet, the impossible happened.  With a Try and a Conversion (field goal–I think) Montréal tied the score.  Apparently draws are rather rare in Canadian Football.  So rare that the rules to break the tie were put up on the Tv screen. 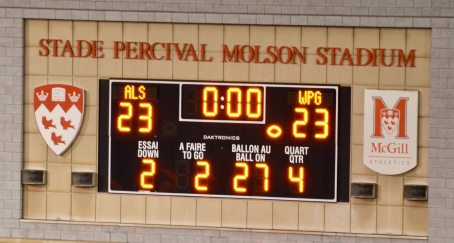 The score at the end of the match, a tie-break was then played out (ALS is Montréal)

That final kick, with six-seconds to go, was a place kick.  It tied the scores and was taken from about forty (yards) from the goal and directly in front.  Not a big kick by Aussie Rules standards.  However, it was seen as desperate and with not much chance of success.  It cleared the cross-bar, but not by much–enough though to tie the game.  During time-on the lead see-sawed, but Winnipeg came out the eventual winners.

For me it was special exposure to part of Canadian Culture that many visitors may not experience.  I was the guest of Professor Steven High (Concordia University) and his teenage son, Sebastian.  It’d was a beautiful night.  We ate hotdogs, popcorn and drank Pepsi…beer if you wanted it.  Thank-you Steven and Sebastian, this evening capstoned a wonderful visit to your beautiful, friendly and fascinating city.  Go Montréal–I will check the scores online with interest.

This piece was written as I sat in the Bella Vita Cafe (Pizzeria) on the corner of Rue Jacques Cartier and Rue Saint-Paul E. in Old Montréal.  While typing I enjoyed a long black coffee, garlic bread and Ministroné Soup, with cheese.  However, the cheese came on the garlic bread, not with he soup as in Australia.  I wonder if there is any real traditional cuisine anymore?  Food is influenced so much by the local culture.  Maybe there is a journal article here?