There are a number of areas set aside for community games.

Arrived in Brighton after three train trips.  The ride under the English Channel from Paris to London was relaxing, fast and enjoyable.  It was interesting seeing some of the French countryside – albeit very fast – the fields, small villages with the highest building being the local church, all old and ‘cathedral like’. After a week in Paris as I was leaving the railway station I discovered how I had not been ordering my coffee correctly.  Asking for a black coffee got you a short black, and calling it long, you get a double shot.  What I needed to ask for was ‘Coffee Americano’.  Next time.

Faced the ‘Oyster Card’ and the London underground with a little trepidation, but got to Victoria Station without mishap.  Travelling in the First Class ‘coach’ to Brighton on the next leg of the rail journey was different, hearing English accents and once out of London, the countryside was lush and green.  A typical English feel to it.

Brighton is a surprise, it is a lot bigger than anticipated, and it being summer, it is crowded.  Had a problem with the hotel booking.  The itinerary and the ‘pre-paid voucher’ did not match up so it was a ten minute walk along the foreshore to a hotel with a bed.  Unpacked and wandered off to the next ‘beach’, called Hove.  All so ‘Adelaidian’, or is Adelaide so British?  Sat overlooking the beach for a hot-dog lunch, amazed at the people laying on the hard pebbles soaking up the sun.  It was warm but not hot enough to sun bathe.  You could hire a plastic lounge £2.50 if your back could not take the hard rocks.

Lovers, I missed the kiss, but the young girl was amused at me taking their photograph.

Wandered along the ‘beach’ then in to the cultural area.  Raided the bank for some English pounds and wandered for a short while.  There are small pubs everywhere.  Interesting names and no doubt interesting histories too.

Rested up for a couple of hours and caught up on some sleep before heading out for dinner at the Regency Restaurant .  Had intended having English Fish and Chips, but didn’t like the chips much so opted for, Minestrone soup, a mixed grill and a San Miguel beer.  I had a long black coffee (Aussie style) back at the hotel bar. 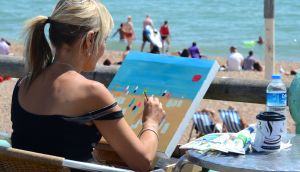 One of a numerous artists along the promenade. 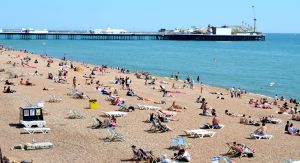 Brighton’s pebbled beach and famous pier in the background. 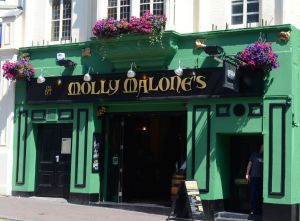 The firs pub I came across.

The name says it all.

One for the cricket lovers, I hope that the service is faster than the game.

It was nice out in the sun.

1 thought on “A Pebbled Beach”