I’m on the train from Vienna to Salzburg however, the Internet is rather slow for online updating. So I have developed a ‘work around’. At the moment we are underground and travelling at 224 kph. Busting into the sunlight the tracks are bordered by walls and bunds so I’m not seeing much of the countryside as yet. Farmland to the north and I can see some ranges in the distance. I’ll return to this trip a little later. Follow this link to my time at the conference and touring Vienna.

The conference venue at the Vienna University was about a fifteen minute walk from the hotel. A comfortable stroll although by 0830 it was already warming up. I have already posted a picture of one of the impressive quadrangles – 650 years as a learning institution. Twenty five years of UniSA – we have some history to create. 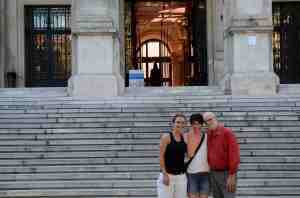 Entrance to the historic University of Vienna, Lisa, Christine and David.

Like most conferences there are papers that attract and others which hold little interest. One of the benefits of attending any conference, academic, business or special interest is the people you meet. I will possibly mention this a number of times in these blogs, but it is of immense value. Those attending the conference came from many places around the world, New Zealand of course, Hawaii, the U.S. Australia and around Europe. Our backgrounds are also significantly different, from professors and accomplished authors (and not all academic) to early career researchers and a strong contingent of PhD candidates.

Having lived in New Guinea and the Solomon Islands in a past life/career I was surprised at how many of the papers with which I had a personal connection.  A break from the conference chatter – the train has burrowed into another tunnel, but not before being able to see a castle in the not too far distance. Not quite Sound of Music, or Cinderella, but impressive for me.  The train has slowed down, only 155 kph now.  Back to Papua New Guinea. One of the post-grad researchers from the Vienna university’s anthropology department and her flatmate are holidaying south-east Asia and Australia later this year. She was keen to visit New Guinea, but had little understanding of the safety issues or lack of appropriate transport in this rugged country. The road network outside of the towns is almost non-existent. It now appears that Christine and Lisa will spend the extra time in Australia.

Just arrived in Linz and it is seventy-three minutes to Salzburg. The remainder of the train trip was uneventful.  I saw some of the countryside, but not easy to photograph.  On arriving in Salzburg the challenge was to leave the station by the right exit and walk the right way to the hotel.  The five-minute walk turned out to be fifteen, but manageable.  I’m staying at another Murcure Hotel, it does not have to old world charm of the one in Vienna.  With this unusually hot weather for Austria another shower was a benefit after I unpacked.

Although not to everyone’s liking, I use the ‘Hop on Hop off’ tourist buses in most places I visit.  They are generally well organised, okay a packaged history of the locality, but I am orientated and can later walk around the places that interest me.  I toured the old town which is a historic complex, albeit catering to the tourists.  The age of the monasteries, churches and university are astounding.

The heat is stifling, even for an Aussie.  No breeze, limited airconditioning and even buying bottled water is is not all that cool.  It is wet at least.  A large ice cold beer went down well though.  I’m on holidays, so a beer at lunch is fine – isn’t it?  My short siesta back at the hotel was a welcome recovery.

I have come to enjoy the classical music that is in and around Vienna and now Salzburg.  What I planned as a quick stroll through the Mirabella Palace gardens turned out to be a thirty-minute interlude of listening to classics played by two flutists. 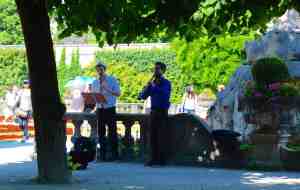 I caught some of the playing on video with sound with the intent of showing it here.  However, the file is large so I will have to play with this when I get home.

This being the birthplace and for many years the home of Mozart, much of the history reflects this musical genius.  I didn’t realise that he died quite young at 35.  Although he had five children only two sons survived. 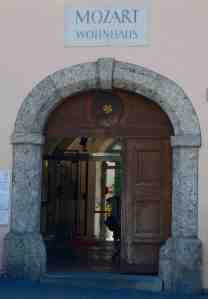 Following a dispute with the local Church leader, Mozart moved to Vienna where he continued his composing.

I will hate to get back on the scales when I get home.  All this food.  While I’m walking about fifteen to eighteen kms per day, I don’t think it has balanced out.  Well it is holidays for a few more days so I will worry about the weight a little later.

2 thoughts on “The Sounds of Music – Salzburg”